Now it has long been brought to our attention that the step up to under 14’s in a youth riders rookie year is most likely the hardest of the racing categories. The disparity in size can be a world apart in their first year as some look like they should have gone straight to under 16’s and others held back in the under 12’s. Yep, some have the luck of puberty kicking in early whilst others are still in the queue waiting for biology to give them a leg up.

Now his coach Joe Perrett (former Team Raleigh and British Cycling development programme alumni) has been here as a youth racer and knew he would have a hard time, but was optimistic of a top twenty placing if he worked hard in training and as they say ‘believed’. Now local road races leading up to the showdown had seen CJ pretty much surviving against the ‘big dogs’ but now they were coming from afar as Glasgow to the Isle of Wight.

The first round of the National Youth Circuit series was to be hosted by Lee Valley Youth Cycling Club at Redbridge Cycling Centre aka Hog Hill. The circuit though is not a favourite for everyone as the Hill aka The Hoggenberg can cause splits easily as the ‘climbers’ show their strength. Nope, no wheel huggers or draft dodgers on this scheduled one hour race as against the normal 30 minutes that under 14’s normally undertake. Yes, this was going to be a tough one as he noted Zachary Walker from the Isle of Man warming up who beat him to 1st place the year before at the National Championships.

Now 88 racers took up the gauntlet on a fine Essex day in March with a stiff breeze adding to the mix. Upon the appointed time they were soon located to the holding pen awaiting their number to be called for a random grid position. Unfortunately lady luck saw CJ heading for the start line in the 60’s with ten on each row, so it was sizing up to be a battle from the gun as the stronger second year boys up front were more than capable of making a break early and holding it.

Now it was game on with the start on the lower circuit so within minutes they would be climbing and crossing the line for the first of one hour plus three laps. Eventually they were in sight and the big guns made no attempt to go easy and feel their way into the proceedings … Things quickly strung out and those gridded near the back were going to have to fight for their supper for at least two laps, and hope that there was something left on the table.

For three laps it was high tempo with the stronger 2nd year racers including Finley Pickering, Max Poole and Joe Kiely dicing for positions with only a few first year rookies showing their wheel such as Joshua Tarling (West Wales Racing Team) who made a solo attempt before being brought back. Rahul Fortescue Talwar (Preston Park) also made a push, but again the group reformed and eventually the pace steadied with Finlay Pickering launching off the front at will.

Eventially the attacks became more frequent even after a touch of wheels caused a crash involving Zachary Walker which ended his race as the racers started thinning out after 6 laps, plus it already looked like 25% of the 88 starters were dropped from the pack and were scattered on the circuit. CJ proceeded to start moving up hovering around 25th position and out of trouble whilst Joe Kiely (Welwyn Wheelers} also played his hand a few times coming into the race with good form in recent competitions with team mate Tom Sharples. Yep, as they say it was on like Donkey Kong.

After 30 minutes lapped racers were being pulled at a rate unseen and many were not happy about the situation after travelling such distances for the showdown. The repeated shifts up the Hoggenberg was shattering the race apart and only those with climbing in their artillery were holding firm as CJ eventually made a rare appearance up front… Strangely after approximately 40 minutes the lead group were stopped near the line and given no explanation why but after a minute the race continued! [Rumour later spread that the race was held up to allow lapped racers and back markers to resume behind the lead group]. 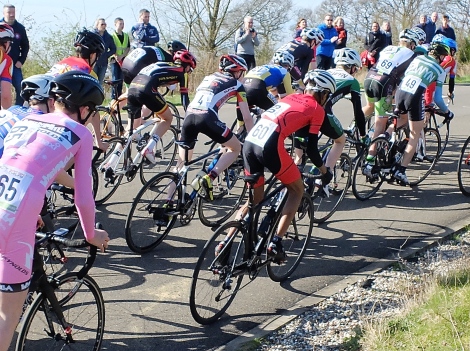 By the time the bell sounded over half the field were going to be down for a record DNF (Did Not Finish) in what CJ later called the hardest race in all his days turning a road pedal. Now normally the fight for the finish explodes leading towards the base of the climb heading to the finish but this time it was suns out, guns out from the descent to the bottom circuit as racers went blitzkrieg looking for space to move forward before the finish. Eventually the wait was over as Max Poole (Bikebox Alan) emerged from the haze in the lead with Joshua Giddings (MI Racing Academy) and Billy Gilbey (VC Londres) taking the podium positions.

Soon CJ came into view fighting for the finish with the best of the rest leaving everything on the tarmac and hunting for the line. Eventually he was awarded 14th position in a race that will live long in his so far short life. Did it live up to expectation..? The answer from him and many others was yes, as the climb took everyone out of their comfort zone and brought the pain in a series opener to be remembered. Ciao for now and a big thanks to LVYCC as organiser and Joe Perrett. 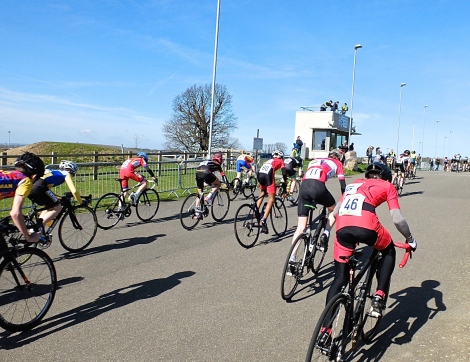