The de-facto battle of the Eastern and London cyclocross leagues has in the past couple of years come and gone with very little fanfare, but this was all about to come to an abrupt end and may never be the same again… First signs of a change a coming were the promotion posters dropped on both leagues Facebook pages by the renowned British Cycling photographer/coach Huw Williams (Event Course Director) billing the showdown fronted by various league racers almost as a call to arms… The bait was now set for a Cross-Off at CycloPark with entries going of the scale. 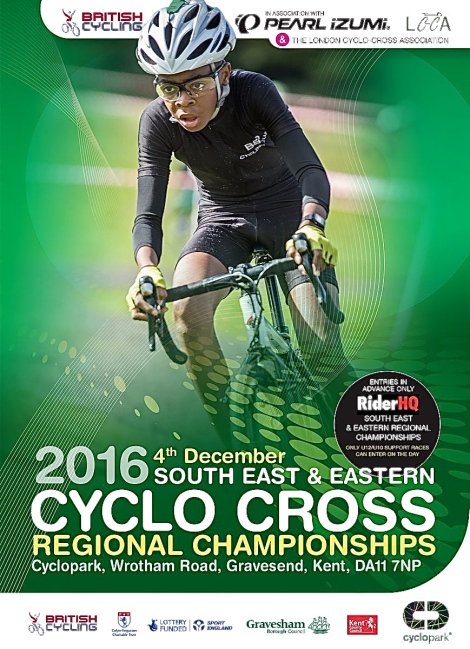 Now the organisation shifts each year between the leagues and two years ago at Betteshangar Country Park, Kent many Eastern racers were not up for going so far down the coast, and last year at Hog Hill mostly London racers appeared to fill the Youth races even with a more central proximity. Hence the ‘battle’ of the leagues has always seemed chequered and under represented with no real clarity of a champion across the categories. 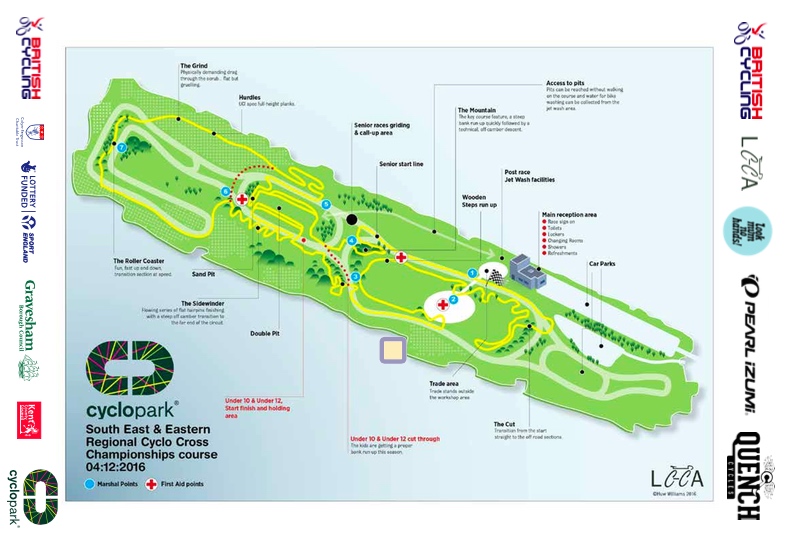 Signs of a great race were also apparent to Caelan from the course map that had hit circulation early into the hype. The cast included an off-camber, sand-pit, road straight, switch backs, trails, steps and the legendary Big Dipper. Though as we know just because you have an all star cast that doesn’t always make for a good film, so I told him to quell his excitement as again not all layouts flow because you’ve used all your big guns just like his Hornby train system at times.

Now with practice scheduled between 9.15 a.m. and 9.45 a.m, it made good sense to arrive before the start time of 11.02 and whilst he was on a reconnaissance it was great to see the likes of Look Mum No Hands supplying the coffee and even Tesla cars vying for our hard earned money… Anyway, soon he was back from his scouting mission and announced the course as ‘sick’ and one definitely for the technicians.

With the under 16’s starting at 11.00 a.m. approximately half of the 79 racers would be ahead of the under 14’s as they waited patiently for two minutes and the whistle to join the fray… CJ was gridded on the front row so would have a shot of going up the road straight with the favourite Eastern racer Joe Kiely (Welwyn Wheelers) and London League’s top crosser Joseph Blackmore (Herne Hill) still in sight before they hit the dirt.

Now for bad company the expected protagonists included Tom Sharples and Euan Woodliffe (Welwyn Wheelers) plus Alex Dale (Lee Valley Youth)… Sharples pushed the pace from the gun before Kiely relived him of his duties and started to check out as expected with Dale taking his rear guard only to eventually start falling back once in the technical sections leaving CJ with a trio in his cross hairs.

Eventually Blackmore started to stretch the elastic and moved ahead after the sand pit and now there was only third place up for grabs against Woodliffe and Sharples heading to the Big Dipper as the crowd eagerly cheered those that were willing to ride it successfully (or not). Only a handful could master it in practice along with the under 16’s National Champion Ben Tullet and CJ was happily one of the few.

By lap two Woodliffe was being distanced from the trio as Sharples powered ahead with CJ managing to get to his wheel only in the technical sections of the course… Eventually it was a two bike race for the final podium spot with the gap see-sawing always in Welwyn’s favour as they eventually made it to the Big Dipper for the finale.  This time CJ failed to get a clear shot and had to run his steed to the top as Sharples shouldered his bike making the escape through under 16’s traffic.

The gap was now insurmountable as they dropped into the road section up to the finish line and with it the final podium spot was gone but not the memory of riding his best ever cross course… Congratulation to all involved in the organisation and as rumours circulate that possibly a National Trophy race will be held at CycloPark,  we can only keep our fingers ‘cross’… Results: Overall placing 23rd of the 79 racers and 4th in the under 14’s Youth category. Video and ciao for now.