Our first journey into the world of portable pressure washers led us to the Sealey PW1712 12 volt rechargeable washer, which though better than a bucket of water was still not exactly screaming ‘pressure’ and was flimsy in use with seals leaking at times… Alas, things move on and now in the under 14’s category it was time to step up in the cleaning department at regional races but not really wanting to get burdened with a petrol pressure washer and a converted wheelie bin to carry water as seen at National races soon to come.

So what was in between a Fisher Price toy washer and the real deal..? Well, after an afternoon of Google up popped the Worx WG629E Hydroshot Cordless Pressure Cleaner with its own 20 volt 2.0 ah lithium battery handling the power duties plus being able to draw water from any water source (even a river as it has filter)… Could this be the route to portable pressure washer heaven…? Well so far it was sure looking like the Pearly Gates up ahead.

Now upon arrival and an initial test it was obvious the available power was far superior to the Sealey by approximately x3 being 320 psi with our extension roof skylight now clean after a good jetting from the boys bedroom window using the folding bucket supplied… Anyway, with the cross season thus far being pretty dry it was awaiting its baptism of race day mud and eventually that came in the Eastern League race at West Suffolk.

Now most came un-prepared as the heavy rain just before the Youth race changed the complexion of the surface from firm under wheel to mud in a heartbeat… Thirty minutes of racing  later and the muddied racers and steeds headed back to the real world in need of a hose down before going into vans and onto bike racks to otherwise harden like mud cakes by the time folks got home. 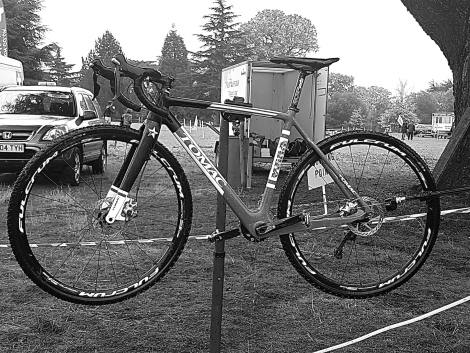 The long and short was after cleaning the boys steed there came a steady trickle of parents wanting a quick clean up and with Dave Kiely (father of current under 14 British National Road Champion) having an Aquaroll of water but no washer at his disposal, it was game on… Now soon it was becoming a bit of a ride in bike wash but I would be able to find out the battery life in real action and whether it would die on its maiden tour of duty.

Soon four other bikes were cleaned and considering we had cleaned our own steed twice, it is fair to say that one battery will clean three bikes (approx’ 30 minutes run time) with no problem to the battery of which I have a spare from a cordless drill sharing the same battery… This is the beauty of the system which also has an available extra powered 4.0ah battery and a quick one hour charger available against the normal three hours charger supplied.

Also available is a turbo nozzle which has more output but needs to be concentrated  on a specific area to get the best results, or when time is of the essence having more force whilst the standard nozzle has five adjustable spray angles… Okay, downsides against the Sealey was the 12 volt rechargeable battery but a Duracell 175 Watt Power Inverter mainly solved that problem so the batteries can be charged whilst we are on the road to and from home if required and has two USB ports for laptops etc.

Now the Nationals at Shrewsbury was going to be the ultimate test as conditions now resembled scenes from the trenches. The pit cleaning area had petrol washers going of hardcore with riders having to change bikes every half lap depending. Could the Hydroshot even survive the carnage in the cleaning area much less have a bike ready for the boy with half a lap changes. This was the question and the look on some pit men faces as I set up base camp with just an Aquaroll and Hydroshot hanging from a tree branch.

Now this is what came into view after the first pit change and I estimated that 4 minutes was all I had to get the steed in a rideable condition for his half lap change and even with the turbo nozzle attachment it looked like a tall order… Within a few minutes the bike was rideable to even my surprise and I was soon running through the mass of petrol washers and mud to the opposite side in time for the next change… In total four changes were completed and the batteries and my nerves held out.

Also, to its credit, after the race both his steed were cleaned up and everything else that was muddy including the Hydroshot which wiped of in seconds… Okay, if running a team pit crew then a petrol washer will win out, but if Hans Solo like myself then this is a great compromise for sure.

Finally, the three year guarantee given by Worx says a lot about the product that at £120.00 is a bargain compared to what else is available (or not) and the fit and finish so far shouts a product made to last… Okay, you may have to figure in other ancillaries (fast charger and 4.0ah battery £60.00 on Ebay) which eeks up the cost, but for me it’s still a winner winner chicken dinner.