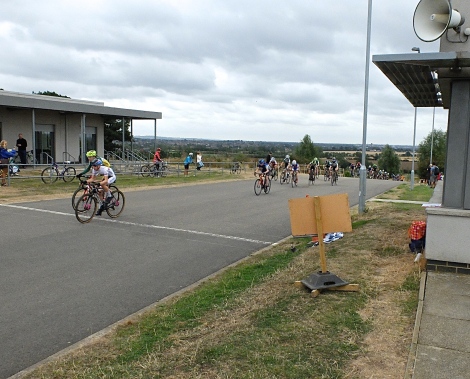 Now whilst some kids bemoan the passing of the Summer holidays and the return to school, a few have the bitterness eased as they start to rev up for the cyclocross autumn/winter season with the promise of real structured racing around various leagues across the UK and CJ is one of them for dead sure.

This year the Elmy”s Eastern Cyclocross League with 17 races covering from Buckinghamshire, Cambridgeshire, Norfolk/Suffolk and Essex was starting at Redbridge Cycling Centre, Hog Hill aka The Hoggenberg. Now with the man-child moving up a division as a first year in the under 14″s category and riding the full course, he was more than a little apprehensive being probably the toughest jump in youth cycling of all the racing disciplines.

I was also glad for the later start time and as we arrived to see the under 12’s on the short course I knew he was glad to be coming of age in the sport.. Now with no gridding in play CJ was placed on the second from last row and we wondered how he was going to get to the first technicals without losing too much to the front runners and the stronger under 16’s as they blasted up the Hoggenberg climb. 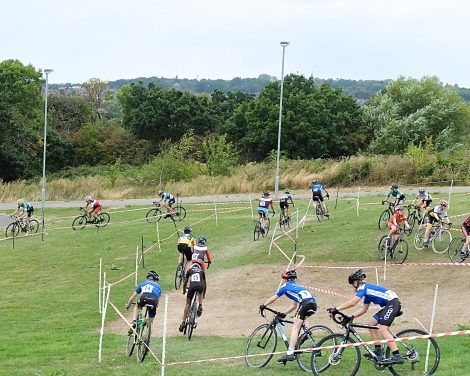 Over 40 racers from an age range of 11 to 15 fought the first climb led by British champion Ben Tullet and Fred Gill of Chelmer CC and it was apparent that already there were three groups in play as CJ dropped into the technical grass section leading the third wave. The first few corners saw him take a few places from Ashwell CC riders and then it was single file for some time as he tried to make his way up the field as the front runners disappeared for good.

By the time he appeared for lap two CJ had made his way to Luke Prenelle of LVYCC and they both worked to get into a group consisting of Alex Dale (LVYCC), Oliver Partner (Colchester Rovers CC), Dexter Mansel-Thomas (LVYCC) who later suffered a mechanical and Tom Sharples (Welwyn Wheelers) with no one gaining an advantage until Dale pushed ahead. Soon they were joined by Joseph Blackmore (Herne Hill) as they reeled Dale back into the group dropping Partner, Blackmore and Prenelle before Dale fell back leaving CJ with Sharples who he had never raced before.

They traded places for the next few laps until the bell where Sharples suffered a puncture near the pits and was able to get his spare bike losing no real time. CJ then decided to ratchet up the pace for the finish and was able to make a break and eventually taking the flag in 7th place overall and 2nd in the under 14’s category behind Joe Kiely (Welwyn Wheelers)…. Now this coming of age race will long live in his memory and being able to take a podium was just the icing on the cake. Ciao for now… FINAL RESULTS