Caelan decided that this was an opportunity to race up with the under 12’s in the London X League as it would be a good to see how he would fair in the three lap war at Hog Hill. Thankfully the race commissarie agreed as his stats showed he’d not impede the action.

From the drop CJ appeared cautious in the company of the big dogs but even so still managed to hit the first corner in fourth position. He pushed forward to gain third and was moving the pace towards second but could not bridge the gap. Soon though he started to struggle to hold his placing in the ‘Spiral of Doom’ which did not help as I’d over inflated his tyres expecting the race to include more of the road and gravel sections of the circuit.

Eventually he was being overtaken and dropped to seventh place in a dog-fight with Luke Ashwood of Sutton CC who kept him at bay for the next two laps. On the bell CJ stalked his wheel and on the corner to the final climb dropped in on his inside and sprinted the hill to the straight taking sixth place. 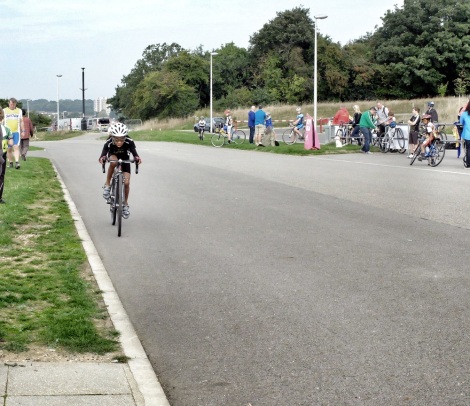 He later complained that his chest was vibrating like a pneumatic drill and considered stopping at one point but was happy to take a top ten all things considered.

CJ said the racer of the day was definitely Welwyn Wheelers own Joe Kiely, who even after dropping his chain still re-took him and later with a puncture ran the race with probably more than a lap to go. Braveheart stuff for sure… 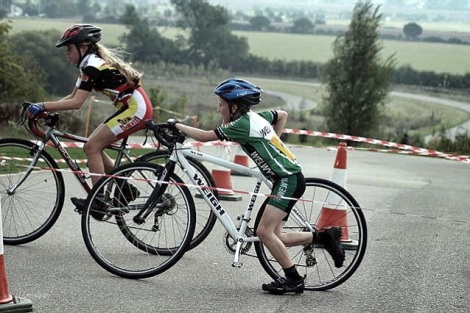 This time I deflated his tyres to more sensible pressures and as he was back racing with the under 10’s decided to make a break if possible. He took the lead  early which he held and pushed himself during the two laps to set a good pace. I wondered if he would beat the time set for the under 10’s the day before which he managed.

He took the flag with a time of 10.04 and I guess we have a lot to learn in relation to bike set up in cyclocross but we’ll get there.

Great weekend racing at our home circuit and a credit to all the work by LVYCC.