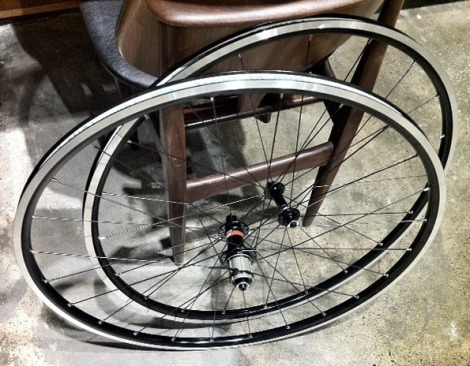 What lightweight wheels for an 8 year old racer, especially when his request does not seem unreasonable to him. Okay, I could say that unless he’s averaging near mid-twenties in mph it’s a waste of time, but does he care when they look soooo cool.

Well, at those prices he wasn’t getting Zipp’s, Lightweight’s or any deep sections, not even Chinese carbon lookalikes with blagged stickers from Ebay. Alas, with our upcoming trip racing in Assen, I will need spares to his Mavic Open Pro’s with 105 hubs bought used for £100.00 other than the inner tube I normally have in my rucksack. So what to purchase in the wheelset minefield?

A bespoke solution is what my dear friend Paul Peynado and bike guru agreed was the best route at the present time. Yes, if he stays in the sport in years to come it’ll be time enough to get stung by marketing hype, wind tunnel tests and branding, but for now – an unbranded solution buying parts from the industry makers who supply cycling manufacturers and build a wheelset to suit CJ i.e. spin up quick in a sprint and hill climb well by shaving approx’ 500 grams of the current weight, which in terms of the overall rotating mass would mean even after braking he could wind up the power again more swiftly and reduce the energy required.

Requirement – Sub 1400 grams in weight (less than a Mavic Kysrium SLR clincher) and a cost in the region of £250.00. Also, the wheels if damaged need to be repaired cheaply without knocking on the doors of some service centre/dealer and getting my wallet molested. I also wanted them to look low key and fly under the radar as large branding stickers are a turn off for me.

As CJ weighs 60+ lbs a set of 20 hole front and 24 hole rear rims were the way to go, and after some research the Kinlin XR-19W Niobium rims were chosen. At 410 grams per hoop they are near the lightest alloy rims with eyelets on the market.

Now the main problem is that in the UK 20/24’s are not available, (wheel builders stocking from 28 hole upwards for the heavier rider) but including shipping from Taiwan the cost was around £70.00 the pair.

Next up was the choice of hubs and eventually we went for the Novatec A291SB-SL front & F482SB-SL rear coming in at 289 grams the pair. These yet again had to be imported as we wanted the SL superlight versions and at £90.00 including shipping we were in budget. UK wheel builders take note and stock what the customer wants as we’ll go overseas where it’s also cheaper.

Lastly was the build up and with it the choice of spokes. The guru and I decided that Sapim Lasers would be used on the front end straight pull through with brass nipples throughout. On the rear 12 Sapim Race spokes would be put on the drive side being slightly stronger and laced crossed and the non-drive side would again be Lasers pulled through straight. This should build up as a strong wheelset and though I could have gone lighter, this direction should require less maintenance.

Now who to build…. Eventually I settled on newly opened Kinoko Custom Cycles (click and drool) formerly Tokyo Fixed in Golden Square London, as I’d dealt with them since the owner worked out of an apartment in Queensway. Well they’ve come a long way and the store is a delight for a cyclists eyes and where else can you see hand built Japanese artisan Kierin frames on the wall. They quoted £93.00 to build including spokes and took a week to order the parts and strap them up.

Anyway, after all the pre-fight talk came the weigh-in and with rim tape the front dropped in at 590 grams and the rear 790. So they just made the fight weight and though CJ didn’t get the deep sections, he understands why he doesn’t need them as we did this process together, ordering and going to the wheel builders, plus he’s got some easily repairable hoops that will take him into his teens if he doesn’t hang up his bike.

FIGHT NIGHT: In boxing the tale of the tape gives the stats but in the actual rumble?

Well the fight came in the form of CJ’s weekly ten mile time trial. His first lap at Hog Hill circuit was a 4.11 and gave no real indication how things would pan out but eight laps and eight climbs later, he produced a personal best with a 34.15 taking near a minute of his previous time.

Also, there are plenty of wheel builders out there who can give great advice based on your requirements and produce an individual pair of hoops. Most wheelsets are made to suit the generic majority like an off the peg suit while a bespoke pair are made to the individual.

p.s. Funnily, just the other day Andrew Griffith of Team IG Sigma Sport remarked while we watched a race, that when he was twelve years old a mountain bike with a slick centre tyre was not uncommon on the starting line of a circuit race. Now parents are ratcheting up the arms race or as I once heard “you can’t buy training or talent, but you can buy equipment advantages”.

As more expensive kit is getting used as a norm’ at the sharp end of youth road racing, it won’t be long before the likes of working class racers such as Tommy Simpson/Bradley Wiggins (the single parent kid from Kilburn) will become a slow dying breed. Update: It appears Bradley’s mother was £50,000 in debt to cycling in his early years so maybe things stopped at Simpson.