Once again the Tuesday Tens run by Lea Valley CC rolled around and CJ had been looking forward to the start of the Summer season ten mile time trial at Hog Hill since the weekend. Unfortunately, by the Monday night it was forecast that a severe weather warning was probably going to be in place due to heavy rains due a few hours from the start. Well, on the day and true to the predicted hour the heavens opened up, though earlier that morning I contacted the organiser asking if as forecast would the trial be cancelled, to be informed it would run regardless.

When we arrived just before 7.00 p.m. it was apparent from the car park that everyone had decided to stay in the dry and we were allocated number 1 to go out. It was looking as if he would have the circuit to himself.

Luckily two more riders turned up and as expected considering the weather CJ’s time was a high 39.01.

Despite conditions he had a great time and credit must go out to the volunteers who put the time and effort organising the trial. We could have stayed home but unless these events get supported, they could go the way of the Dodo bird and Caelan for one doesn’t want that happen.

Footnote: A week later rider numbers were in the twenties and CJ put in a respectable 36.31. 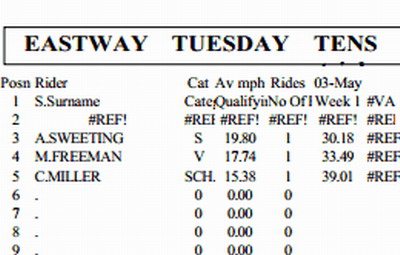