The first round of the British Cycling National Youth Circuit Race Series rolled into Hog Hill being the race that Caelan was peaking towards. Personal mission statement at the beginning of his under 10 rookie year – top five finishes at local races and a top ten at the Nationals.

Being realistic the top ten placing was always going to be a tall order, as of the 30 odd gladiators in Caelan’s age category he was more than likely the youngest at still 8 years old with most being second year racers, but he was determined to punch above his flyweight.

As we walked into the arena it was apparent on the beautiful spring morning that some fine racing was about to grace the circuit, with British Cycling in full attendance and a crowd already in the hundreds.

Caelan started on the second row and from the drop was able to stay with the main protagonists from clubs as far afield as Wales to the Isle of Man. Within the first few laps saw some 30% of the field ejected with Joshua Tarling (West Wales CC), Bevan Smith (Maindy Flyers CC) and Ben Askey (Lichfield City CC) pushing the pace with lap times around 2.07 constantly, I knew he was barely in his comfort zone. Eventually a break was made by the three aforementioned riders with Tom Davies (Welwyn Wheelers) and Caelan didn’t have the positioning or the pace to go with them. His group held station and within a couple of laps they made contact again, but with two laps to go the same four broke loose and this time the intention was to stay ahead until the end of the race.

The bell soon sounded for the hill climb taking them to the finish with Caelan leading the chasing group followed closely by Joe Kiely (Welwyn Wheelers) and both made the break that was enough to send them over the brow in 5th and 6th respectively. Kiely then overtook Caelan on the descent, though by the time they reached the summit of the alpine climb he was on his wheel awaiting the final tight turn where he held the inside line and executed his sprint taking 5th place by a bike length.

The podium places were taken by Joshua Tarling (1) Bevan Smith (2) and Ben Askey (3) with a special mention to Tom Davies narrowly missing a 3rd placing.

CJ was 17 seconds behind the winner in the near 17 minute war and was happy with his position and the 12 British Cycling ranking points. This was also the first time he layed out on the grass to catch his breath for a minute so I knew all was left on the tarmac for this one and based on the transponder times, it was his hill climb and sprint that made the difference. Special mention to Will McFarland youth coach for East London Velo, who only a week before sent CJ sprint videos and worked on his technique in training as well as Steve Jensen (LVYCC). Also, credit to all who worked behind the scenes and the event organiser Terry Morgans-Slader.

Happily for Caelan his day was not over as he waited to see one of his heroes Germain Burton (former National Youth champion) race the Junior category later on. Germain also previously agreed to meet for a chat and he graciously obliged by answering some questions that CJ had written down the night before:-

CJ- Where is your favourite place to race…. GB- Crystal Palace and Hog Hill.

CJ- Who is your favourite current pro-rider….  GB- Philippe Gilbert.

CJ- Who is your favourite racer from the past but not your dad… GB- Eddy Mercyx.

CJ- What advice would you give me to help me road racing…. GB- Race smart with your head.

CJ- What advice would you give my dad to help me road racing…. GB- Don’t push too hard and just enjoy.

CJ- Would you like to see more ethnic kids road racing…. GB- Yes, it would be nice. It’s picking up slowly and your here.

CJ- Who is your favourite kid road racer…. GB- Easy, you Caelan.

CJ- What is your favourite race…. GB- The World Championships.

CJ- Which is your favourite Classic race…. GB- Milan/San Remo.

Many thanks to Germain for taking time out with CJ which he greatly appreciated. 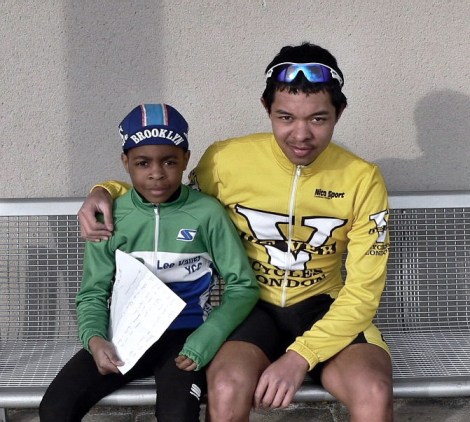