Over the last year I’ve noticed more parents getting their children on 700c wheel bikes early in order to either try and level the playing field in terms of wheel rotation or save a few quid on upgrading as they grow. Only last Saturday I spotted an under 8 racing a 700c small framed bike with no modifications like a chopper with ape hanger bars. Yes, he was riding it, but was he getting the most out of the bike?

Caelan’s 43.5cm Giant Defy XS was modded to fit with a 50mm ‘A’ Head stem from Brick Lane Bikes with a 6 degree drop, an Outland carbon 30.9  in-line seat post to move the saddle more over the centre crank and Giant TCR carbon forks with a shorten steerer. Also, an Islabikes Luath 700 small handlebar was added giving a more shallow drop and less width to keep his arms tight while in the sprint position. Still, I’m no expert so a bike fit organised by Steve Powell father of Harrison Powell ‘Essex Boy Road Racer‘ and sanctioned by Lee Valley Youth Cycling Club was most welcome. 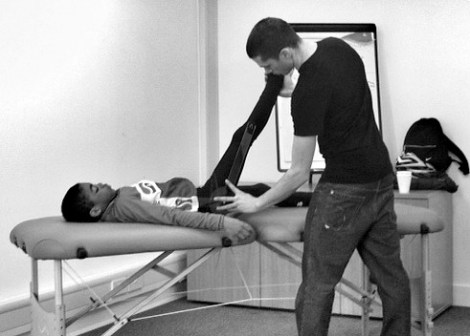 Chris Panayiotou is a pro’ bike fitter and tri-athlete holding a BSc in sport rehabilitation working out of  Stephen James (BMW) Cycles in Enfield, Middlesex. He spent about an hour at Redbridge Cycling Centre firstly checking Caelan’s leg flexibility for any restriction which measured 75 degrees in one leg and 70 in the other. This was as expected considering he only stretches after a turbo session. 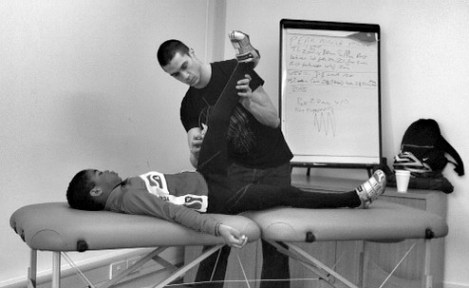 Next up was the tripod position or the 90:90 with the rider in the upside down position as if on a bike to check movement at the bottom of the pedal stroke i.e. if a 40 degrees measure then no point setting the saddle to 30. CJ was measured at 35 degrees being enough to get good extension to the pedals.

Next he was placed on the bike and marked with sticky dots in positions of the joints (ankle, knees, hips and shoulder blades) so as to calculate he was at 45 degrees and needed his saddle moving upwards by near one centimetre to get better extension and the required 35 degrees. The saddle also needed moving forward about the same and in the sprint position CJ had the desired 90 degree box angle and good centre mass when seated on the nose.

Obviously, the fit was a lot more technical than I am able to explain or fully show and a more in depth bespoke fitting can be had from the Stephen James showroom, never the less I found it informative as well as giving me pointers as to how to keep Caelan in the right position whilst growing. This is also  invaluable so as not to cause any long term issues during his developing years. Recommended.

Many thanks again to Chris and Steve for organising this for the LVYCC road racers.